I was born and raised in South Bend, Indiana, and have lived here nearly all my life. I've read English mysteries since I was a teen-ager, though, and they bred in me a love of England that led to my first mystery series. I knew it was unlikely I could ever afford to live in a lovely little seventeenth-century cottage somewhere in Kent or Sussex, but if I created a character who did just that, I could live her life vicariously, and instead of costing me a fortune, that life would actually make me some money. Such a deal! 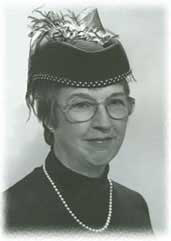 Thus was born Dorothy Martin, who is essentially my alter-ago, though she's named after my favorite cousin. She appeared first in a short story I wrote many, many years ago. It has never been published, but Dorothy waited patiently in the wings, and when the idea for her first book came into my head, there she was, ready to take center stage.

That book, The Body in the Transept, won the Agatha award for Best First Novel of 1995, and Dorothy has gone on to many more adventures since. In 1998 I began to hanker after a new character, a new setting, and—I'll admit it—a little more income. So I came up with the series set in my home town, starring a strong-willed young Swedish housemaid. Housemaid? Yes, because that series is set about a hundred years ago, when the wealthy families in America still had servants. Hilda Johansson works for one of the wealthiest families in South Bend, the Studebakers. You may know them as automobile manufacturers, some years back, but in Hilda's time their main products were wagons and carriages. I've enjoyed the research these books have required, but Hilda is still seeking a new publisher, so I'm not writing about her just now.

I've been pretty successful in reinventing myself in widowhood. I find there are advantages to living alone. For one thing, I can eat what I want, when I want. I don't cook as much as I used to, which is a pity in a way, since I always loved to cook. But cooking for one, and then cleaning up the kitchen, seems like an awful lot of trouble. I've learned to love Lean Cuisine!

One sad note: my last cat, dear Ginger, went to the Rainbow Bridge in early December. His age and FIV (feline immunodeficiency virus) caught up with him and I had to make the wrenching decision to say good-bye. He was a friend, companion, and comfort, and I miss him more than I can say. He still lives, though, in the new book—in fact he walks on the stage on page one!