I had a good time writing Indigo Christmas, especially researching the Swedish customs for St. Lucia's Day. If you live near a Swedish Lutheran church, you should check it out some December. It's loads of fun. 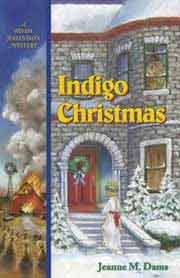 Once housemaid to the wealthy Studebaker family in South Bend, Indiana, Hilda Johansson is now married and living a well-to-do life with her new husband. But her Swedish family doesn't get along with his Irish relations. She's having trouble finding friends, since she no longer fits into her old world and isn't accepted in the new one. Just before Christmas, when the husband of her sole remaining friend is accused of theft, arson, and murder, Hilda has to find new ways of investigating a crime that seems to make no sense.

In the hard economic times of 1904 with bank failures weekly, Hilda tries to aid the unemployed youth of South Bend by helping to form a Boys' Club modeled after Hull House in Chicago. And she also enlists some of them as "Baker Street Irregulars" in her mystery investigation, giving the reader a vivid sense of the city and street life of the times.

The Hilda Johansson series hasn't been running long enough to need a reboot (this is only the sixth installment), but the author shakes things up a little anyway, keeping the series fresh and offering readers a look at Hilda and her environment (South Bend, Indiana, in the early 1900s) from a new angle. The husband of one of Hilda's closest friends is under suspicion of murder, and Hilda would dearly like to help out . . . but she is not sure she can. Hilda's married now, mistress of her own house, no longer a maid—and, to her great consternation, cut off from her usual sources of information: shopkeepers, household staff, and so forth. Luckily, Hilda's a resourceful woman, and she soon comes up with an ingenious solution to her investigative problem, one that will, not to give too much away, be of particular interest to Sherlock Holmes fans. The novel has a suspenseful story, but, as usual, it's the characters and setting (rendered in precise but not obtrusive detail) that really capture our interest.- David Pitt

Hilda Johansson Cavanaugh finds herself caught between the world of her past as a housemaid and her new role as a wealthy wife in Agatha-winner Dams's delightful sixth mystery set in early 20th-century South Bend, Ind. (after 2005's Crimson Snow). When Hilda's only friend's husband is accused of stealing, arson and murder, Hilda determines to prove him innocent. Meanwhile, as part of her efforts to belong to society, Hilda joins a group of well-to-do members of the community in creating a Christmas party for street boys, some of whom she hires to help in her investigation. The mystery, which evolves naturally and slowly, tends to get lost amid the subtle and sometimes not so subtle social commentary on such matters as the friction between Hilda's Swedish Lutheran family and her husband's Irish Catholic relatives. Still, series fans will be well satisfied.